From 6th November to 18th November, 2022, the 27th session of the conference of the parties of the United Nations Framework Convention on Climate Change (UNFCCC), commonly referred to as COP27 took place. COP27 slogan is ‘Turning ambition into action’. From the onset, it was an extraordinary experience. The conference which began with an application process culminated in 198 parties uniting to make firm decisions to aid each other in saving our planet, and shaping its future.

My passion for the climate change cause was awakened a few years ago and awhile working as a public health officer and studying the health effects of climate change, this passion grew.

According to the United Nations, the health risks related to climate change are on the rise worldwide and coordinated international responses can help prevent some of the worst impacts of climate change on health. Climate change has serious health effects globally, and many infectious diseases, including water-borne ones, are highly sensitive to climate conditions. Additionally, climate change will bring new and emerging health issues, including heatwaves and other extreme events. Malnutrition and undernutrition are a concern for a number of developing countries, due to food insecurity caused by floods and drought.

When it was decided at COP26 in 2021 that Egypt, my home country, would be hosting COP27 the following year, I considered myself lucky and knew without a doubt I had to attend. I considered it a once-in-a-lifetime opportunity and started exploring the options available to me.

My research led me to discover that I could attend COP either as a representative of a party to the convention, a high-level negotiator, press and media member, or as an observer of a UN agency, accredited IGO or NGO. The latter option provides the opportunity to observe a few days of the conference. The options did not appeal to me because I wanted to be more than an outside observer. And then, I stumbled upon the COP27 volunteering application form!  It was announced by the Ministry of Social Solidarity (MOSS) in coordination with the Ministries of Foreign Affairs and Environment in Egypt. The goal was to recruit 1000 volunteers to take part in different logistical and support functions prior and during COP27 in both Blue zone and Green zone areas. Additionally, the volunteers would also get involved in areas outside COP27 venue such as airports, transport hubs and hotels. It was the perfect opportunity I was searching for and I was completely amazed. Without hesitation, I sent in my application 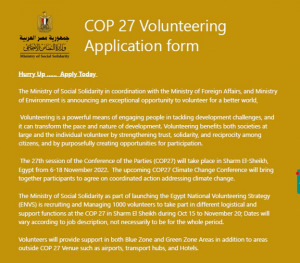 The entire volunteer selection process took place in the six months leading up to COP. It was a remarkable journey and the timeline went thus:

The final selection of successful volunteers was done after the mandatory boot camp and I was selected! 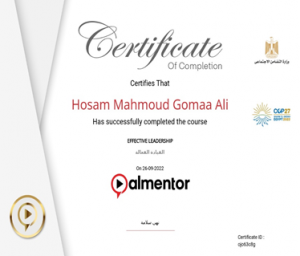 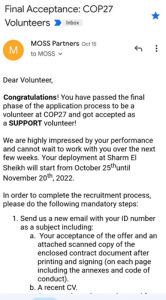 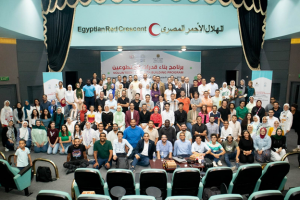 During the Two-day workshop During the boot camp in Alexandria

MOSS received 9900 applications from 80 countries from which 600 volunteers were selected. The volunteers at COP were from different countries asides Egypt so it was indeed an international affair. After selection, we signed the volunteering with MOSS and our work kickstarted from October 25th, to run till 20th November, the end of COP27 Sharm el-Sheikh an Egyptian city on the southern tip of the Sinai Peninsula was the destination of COP27 volunteers from Egypt and around the world on October 25th. Sharm is located 500km away from Cairo and it is also known as the City of Peace. This is because it has hosted several International Peace Conferences over the years.

We arrived 12 days before COP began so as to settle in and undergo on-site trainings, familiarize ourselves with the city and get registered to the Blue and Green Zone as that was a time-consuming activity as a result of the large number of delegates and participants in COP. COP27 recorded over 46,000 delegates. We all had the same mission, to save our planet, brake greenhouse gases emissions and very importantly, keep our home habitable. 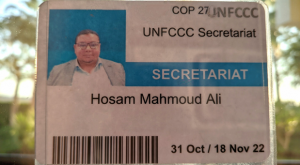 As volunteers, we were allocated to different teams: ICT support, transportation, airport, crisis management, hotels, blue and green zones management, and for the first time in the COP’s history, the accessibility team. The accessibility team was created to support delegates with special needs, to assist them when attending their sessions, accompany them to their buses and wherever they needed to be in the COP. Volunteers served as the hub between the UNFCCC secretariat and the central operations room of COP27.We were the frontliners and ensured everything ran smoothly for all COP27 participants 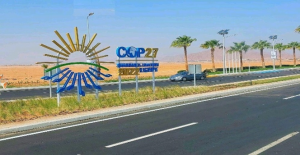 COP27 venues were divided into several zones, each requiring its own registration process. The Blue Zone belonged to the United Nations Secretariat, and the Green Zone belonged to the Environment Ministry. The Blue Zone was the area at COP behind the security checkpoint and it required a badge for access. The area consisted of the official plenary space, negotiation rooms, pavilions, office space, and side event space. The Red Zone was more secure and strictly protected. It was inside the Blue Zone and it was the site of events like the presidential plenaries and high-level VVIP meetings. The Blue Zone also included the Climate Action Innovation Zone which connected national governments with cities, regions, businesses and investors to accelerate the delivery of stronger and more ambitious climate action. The Green Zone was the platform where business community, youth, civil and indigenous societies, academia, artists and fashion communities from all over the world could express themselves and their voices would be heard.

The sun, is one of the most significant items Africa is known for. Some people believe that the rising and setting of the sun represents the cycle of life, from birth to death to rebirth. The light and warmth the sun brings are essential for life on earth 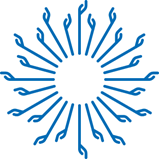 The Sun of Aten:

It is Aten represented in the sun. Its rays ends with human hands. The hands symbolize giving life and prosperity to the people and all the welfare that we are blessed with. Also, it represents the useful sun rays that the earth can benefit from

The horizon represents the border line between the useful and harmless rays of the sun. It reflects what we must receive from the sun is beneficial for the earth and the people, and what we must avoid.

The globe incorporated in the logo represents how we should be on the earth and keep it preserved, balanced and safe. It also represents Africa, the continent hosting COP27 in 2022.

UN Secretary General Guterres opened the conference stating “We are on the highway to climate hell with our foot still on the accelerator.”

COP27 began with World Leaders Summit on 7th to 8th November. 112 of the world’s heads of state and government leaders gathered in high-level round table discussions under the theme ‘Together for Implementation’. They discussed climate action and outcomes achieved in the past 30 years and future action plans.

As a volunteer, I performed duties daily during COP. My tasks varied daily and the teams changed according to the organizational needs of the conference. It was very enjoyable working in such a cross-cultural environment with so nationalities.  It was even more amazing because we were gathered to serve the same cause: climate change and climate action.

In my opinion, the volunteering program was able to achieve its set goals:

Of course, it was not possible to attend all events at COP. The list of events on each day was made available when the QR code of a pavilion was scanned. With the list of events in my palm, all I had to do was pick the event that interested me most.

Sweden is a role model of sustainability has and has always ranked second and third in Sustainable Development Reports. It is worth mentioning that the 1972 United Nations Conference on the Environment which took place in Stockholm was the first world conference to make the environment a major issue. The participants adopted a series of principles for sound management of the environment including the Stockholm Declaration and Action Plan for the Human Environment.

I am a big fan of Swedish culture. I was mostly present at the Swedish pavilion during my free time, to attend very valuable and informative sessions by Swedish ministers and CEOs of renowned Swedish firms. I was able to learn how they partnered to achieve ecofriendly products and sustainable solutions etc. For example, it was very enlightening learning how they manage and benefit from the waste in Sweden. Additionally, I got to know how they eliminate their landfills and make use of the waste to produce biogas as fuel for public transport buses and cars, reducing the harmful emissions. Another prime example of cooperation is how Sweden unlocked Sub-Saharan Africa’s largest solar project to produce clean and renewable energy in Angola through Svensk Exportkredit (Swedish Export Credit Corporation SEK), financing solar power in Angola. It was also a great opportunity to practice my Swedish language skills. The Swedish pavilion in COP27

In addition to the daily sessions and events about climate action, there were a multitude of other political discussions. There was also a space for protests like the vegan protests at the Blue Zone entrance in response to meat and dairy greenwashing. Ironically, in the COP venues, both vegan meals and non-vegan meals were made available. Additionally, hotels provided delegates with meals wrapped in layers of plastic and plastic bags. Many have commented on the hypocrisy of Coca-Cola being COP27’s sponsor, despite being reported as the world’s largest plastic polluter.

After days of intense negotiations that stretched into early Sunday morning, the 20th of November witnessed COP27’s closing plenary. A breakthrough agreement was reached on an outcome that established a funding mechanism to compensate vulnerable countries for ‘Loss and Damage’ from climate-induced disasters.

A photo with the UN Secretary General, António Guterres rounded up the = 9-month COP Volunteer project that involved recruitment, capacity building and volunteer deployment.   We received certificates of acknowledgements for our efforts in COP27 afterward.

The closing photo for COP27 volunteers with UN Secretary General 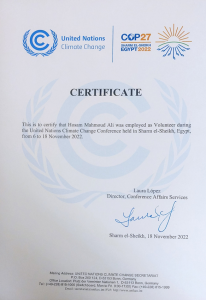