We’re finally here in Uganda! It was a long 24-hour journey for most of us who left on the evening of June 13th, but 2 flights and a 5-hour minivan ride later, we checked into the Mwana Highway Hotel around 6pm. Darkness was just falling over the little town of Iganga, and the noise of traffic and horns and the evening bustle reached us as we lugged our backpacks and suitcases and boxes of boots and raincoats for the CHWs that we had brought from Sweden into the hotel lobby.

After a bit of chaos getting rooms for 9 people for the night, we settled down for a group dinner in semi-darkness with Michael and Jairus from UDHA, who picked us up at the airport earlier in the day, and planned for a team meeting at the UDHA office the following day at 8am. 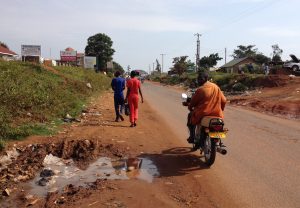 Street scene in Iganga on the way to the UDHA office. Picture by Tessa.

The next day, during the 10-minute walk from the hotel to the UDHA office, which is opposite the Mercy Health Centre, we met children and adults alike waving and shouting ‘Mzungu! Where are you going?’ and street vendors selling their wares and fruit and fried food along the way. Ugandans are some of the politest and most welcoming people I’ve met to date.

At the office, we had the opportunity to meet most of the UDHA staff and hear about the projects they’re working on, as well as hear from Michael about the different opportunities for the team to get involved in over the next few weeks, such as peer-educator training for HIV/AIDs and STI prevention. We also discussed the schedule for the next few weeks of field interviews we’d be conducting for the Maama project, and went over the different interview tools we had for the different groups that we would be talking to- the community health workers, the mothers who had been part of the Maama project, their husbands or partners, traditional birth attendants, and the staff at the Mayuge Hospital and the antenatal clinic.

And then it was time for the first local meal of the day! We randomly stumbled into a restaurant serving African, Indian and Chinese food (!!) and most of us ordered the traditional (vegetarian) Ugandan lunch meal which had posho (white), matooke (yellow) and African chapathi accompanied by some cow pea curry. Delicious! We so badly needed a cup of coffee afterwards, and interestingly enough were brought large thermos’ of hot milk with a bit of coffee powder to be added in! Clearly Ugandans like their milk

After the usual routines of changing/withdrawing money, hunting for SIM cards, unpacking and settling into our rooms (equipped with mosquito nets), we finally met for a team debrief on the field work and both qualitative and quantitative interviews that would start the next day, with two teams of 2 interns, an interpreter and Jairus going out to the village of Kyete to first meet the local police and community leaders, and then the community healthcare workers and mothers. Exciting times ahead- the whole team is pretty pumped up with anticipation and energy for the next few weeks to come.

Stay tuned as we get more updates and interesting stories from the field!