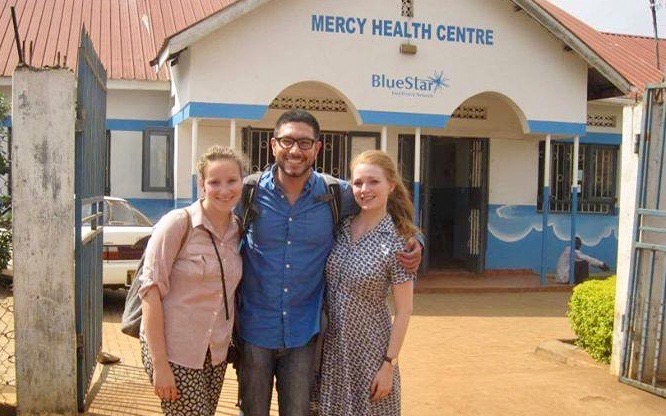 It’s a late September afternoon and I’m sitting at a café in the heart of Stockholm. Swedish Organization for Global Health, SOGH, has recently turned five years old (!!) and I couldn’t think of a better way to celebrate than by taking a look back at how the organization was started. To help with that, I decided to have a chat with Clara Fischer, the co-founder and former Director of SOGH.

I called a bit earlier than agreed, but after a few rings, Clara’s cheerful voice greets me. I humbly let her know how unprepared I am and how silly the four questions I have prepared might seem. Clara quickly assures me that it will all work out fine and we agree to just go with the flow.

What are some of your best memories with SOGH?

Clara: “The time spent in Uganda!”

In 2014, Clara, Sergio and Sanni, three fellow students from Karolinska Institutet, decided to volunteer in Uganda during the summer. They were there visiting the Uganda Development Health Associates (UDHA), an NGO working with community-based approaches to maternal, child, and sexual health. In 2014, UDHA had an ongoing project called Maama project, which focused on maternal and child health. Sadly, the project was running out of funding. In hopes of saving it, Clara, Sergio and Sanni asked if they could take over the project and fund it from their own pockets. More importantly, they wanted to do this whilst continuing their collaboration with UDHA.

One can proclaim this defining moment as the birth of SOGH because in September 2014, shortly after the UDHA project was handed over to the three students, SOGH was officially registered in Sweden as an NGO. The goal was to establish an organization that could support the UDHA project, which was nearing its end. Five years later, that project is still running, but under a new name — the Mama & Family project.

As I am intently listening to Clara tell me all this, I cannot help but be amazed. I couldn’t agree with her more when she expresses gratitude towards those at Karolinska Institutet, who gave their time and effort to help establish SOGH, especially when nobody was getting paid to do it. For her, the coolest part of this experience was the social entrepreneurship aspects, which she describes as “to be able to start something without experience but gaining the experience whilst doing it”.

What do you think makes SOGH unique?

Clara: “SOGH has been and continues to run on everybody’s free time for the entire 5 years. This is what makes SOGH unique!”

It’s no secret that SOGH is a student initiative and has been from the very get-go. This is another thing that Clara thinks is unique about SOGH; the connection the NGO has with students. I personally found out about SOGH and became their communication manager when I was a Global Health Master student at Karolinska Institutet. Ironically, when Clara asked other experienced individuals for advice on how to effectively run SOGH in its early days, she was told to steer it away from student involvement. Thankfully, she disagreed. According to Clara, students are so motivated, carry so much knowledge and are usually on top of current research. She doesn’t think that a student-led initiative is an issue in this case. She pointed out that, again, this is what makes SOGH unique.

What inspired you to become director of SOGH?

Clara: “Being one of the founders pushed me into the role when the other two co-founders [Sergio and Sanni] left the organization.”

Prior to becoming the director of SOGH, Clara had the role of partnerships manager. She was scared to take on the role of director, but says it’s the best thing she’s done in her career. She noticed that SOGH was making a change; its partnerships were growing and UDHA was happy with their collaboration. In a way, Clara felt obligated to take on the director’s role because she felt like she had to be that “one” consistent person in the organization. It’s common that people on SOGH’s board of directions come and go. It’s not surprising since for most students, after graduation, life can change drastically (some find new demanding jobs, move cities or countries, change focus or find new hobbies, etc.) When asked about what her motivation was as director, Clara answered: “to make it a persistent role.”

Where do you hope to see SOGH in another 5 years?

Clara: “I hope to see it become a platform for newly graduated students to gain their first global health experience within SOGH. I want SOGH to keep its research and the close connection it has with students. I also hope that SOGH continues for another 5 years!”

Before I end the call, I mention to Clara that I truly believe SOGH will continue to prosper. Alongside the Mama & Family project, SOGH is today running two additional projects: Tanden Frisk (a dental health project) and Ekibadha: Our Periods Matter (a menstrual health project). Every year, SOGH receives applications from eager students and professionals that want to volunteer. In 2019, for example, a record number of people joined the board of SOGH. The organization wouldn’t be what it is today without the passion and dedication of its members and supporters. The new director, Giorgia Dalla Libera Marchiori, shares the same devotion to SOGH as Clara did and is taking the organization to even greater lengths. She has done an incredible job so far and is the right person to lead the organization into the new decade. With that said, here’s to another five years!