We (Linn and Hedvig) are both interested in reproductive health and prevention of sexually transmitted diseases (STDs). We were therefore happy when we got the opportunity to go away for one week to experience how UDHA (Ugandan Development and Health Associates- the partner NGO that SOGH cooperates with) arranges peer education training about HIV/AIDS prevention.

We were picked up by Robert and the driver early on Monday morning and drove up north to the more rural (compared to Iganga) Buyende district. Robert, a social scientist with previous work-experience from Ugandan Red Cross, is a project officer at UDHA and one of the persons responsible for coordinating these trainings which often entails week-long stays in the remote districts outside of Iganga.

Through the facilitators and the working material they had we found out that the prevalence rate of HIV for youth (15-24 years of age) had increased from 2.9% in 2004/2005 to 3.7% in 2011 (Uganda Indicator survey). That was one of the reasons why they have the program for the future peer educators. The program runs for five days and the purpose of the training is to equip the participants with appropriate knowledge and skills to prevent HIV infections among youth out of school. They have four days of training and during the last day they work on an action plan how they should spread the information in their own community. The first peer education group that we went to consisted mainly of men with the exception of one woman. According to the facilitators the reason for his was that it was more difficult to find women that fulfilled the requirements for the peer educators, e.g. being able to speak English and read/write. Many women in the villages also get married and have children early which makes it difficult for them to go away on trainings and volunteer as peer educators. 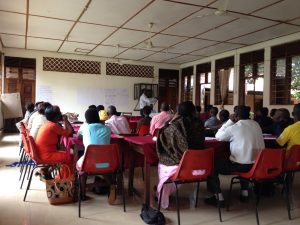 The training started with an introduction when the facilitators let the participants express expectations and fears about the training. After that they moved on to talking about the HIV situation among the youth in Uganda and about how HIV is transmitted.  After a late lunch which we ate from plastic bags since they ran out of plates, the future peer educators had a group-discussion about factors that predispose youth and adolescents to HIV infections and the second group discussed strategies which can be used to prevent youth and adolescents from acquiring HIV/AIDS. Transactional sex and sugar-daddies (older men providing girls or women with material things or money in exchange for sexual services or relations) as well as poverty were some of the themes that occurred in these discussions.

The village that we stayed in was small consisting only of two main roads sided by the typical concrete houses with pleated tin roofs. As most houses did not have electricity, most street-snack stands and fruit vendors had candle lights which meant that you could still locate your way down the main-street in the pitch-dark night. The guesthouse that we stayed in had electricity occasionally but unfortunately not during our stay. We had a Rolex (veg omelette rolled up in a fried chapatti bread) for dinner which is a typical fast food here in Uganda. We took a bucket shower under the open sky and thereafter went to sleep.

On Tuesday and also on Wednesday we went to another training that was for the Villlage Health Team (VHT). The VHT are people that work as a link between the health care system in Uganda and the community. The focus for their three day training was HIV, tuberculosis and malaria, which are some of the more common health problems in Uganda. The facilitators for the training talked about prevention, early discovery and treatment of the diseases but also about how to communicate effectively. The individuals who attended this training were a bit older than the peer educators and even though the male participants were still in majority the amount of female participants were higher than in the peer education group. The VHTs  seemingly had a lot of experience, claimed that they enjoyed the training ‘so so much!’ and seemed to take away a lot from the training. The venue for the training (Rome Safari Lodge) was also very beautifully situated, surrounded by green nature for as far as the eye could see, and we were a bit sad to leave that place on Wednesday to get closer to the next training site.

The peer education group that we met there had a more equal composition of male and female participants which was nice to see. Sam, one of the facilitators, was quite an activist; together with his wife he runs a vocational training centre for teen-age mothers in Kampala, however he also stressed the need to involve teen-age fathers as active parents.

During the training day on Thursday they also talked a lot about effective communication and barriers to communication. Later that day all the future peer educators were also offered to take a rapid HIV test, which all of them did. Sam, the facilitator, explained to us that it was an important part to make the peer educators stop worrying about their own serostatus so that they can focus on convincing their fellow peers to get tested.  Knowing your own serostatus enables the person to change their own behaviour in regards to HIV-transmittance; either avoid spreading the virus to other people or avoid getting infected.

During the last day of peer education training they made their action plans on how to inform their fellow peers in their villages. In the end we watched the ceremonies for the two groups where they received their certificates for the training.

A part of the peer education course was about HIV-stigma, which, according to us, is a somewhat neglected problem in the Swedish context. Some of the peer-educators mentioned that people living with HIV in the villages often are excluded and stigmatized which makes them vulnerable to financial and material hardship.

The car ride back to Iganga took many hours. It had rained quite a lot which very quickly turned the red dirt roads into a muddy mess. We were a bit afraid that we would get stuck somewhere far from Iganga but luckily we had a good driver who managed to get us home without any incidents of having to push the car in the mud.

Overall it was a memorable trip both for getting a glimpse of HIV prevention efforts conducted at the grassroots level but also for seeing a bit more of Uganda and spending time with the friendly people in this country.