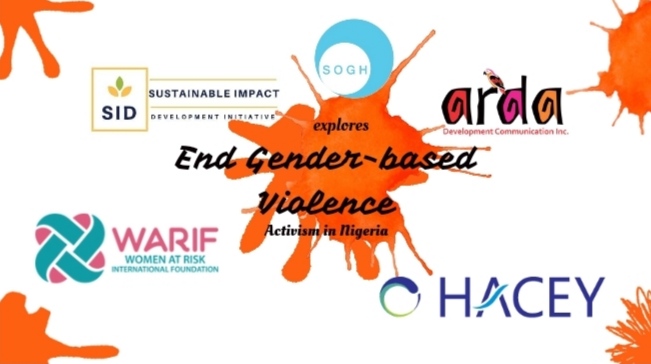 Gender-based violence (GBV) is a major problem that can never be overemphasized. It comes in different forms, from intimate partner violence, female genitalia mutilation such as breast ironing, and many more. Yearly, the 16 Days Of Activism Against Gender-based Violence runs from the 25th of November to the 10th of December. This international campaign challenges gender-based violence and champions for policies, actions and decisions for a safer world as universally, women and girls are subjected to different forms of GBV, sexual, physical and emotional. It is only fitting that the 16 days of activism against GBV exists. There can never be too many voices speaking for the cause. Rather, we need increased activism, we need to turn up the volume to achieve real change/equity.

Not a day goes by in my country, Nigeria, that I do not hear news of one form of GBV or the other. Most times, turning off from the internet seems to be the best option, because repeatedly, these perpetrators continue to perpetuate their dastardly acts. I cannot help the frustration and pain that runs through me whenever I encounter such horrors. Being powerless and unable to do more, it bothers me. While it is tempting to opt for the “solution” of ignoring it all, it is not right. If we all choose to turn off, who will speak for the little child who is writhing from the searing pain shooting through her insides? Who will fight for the woman in the corner who has been bruised and  battered?

In a patriarchial society like Nigeria, it is not easy to break through these molds as many choose to accept GBV as the norm. However, there are several organizations who are fighting GBV in Nigeria and in this post, I intend to shed light on four of these organizations. Their efforts are loud, and even more so during the campaign. We need more voices like this, and I will be showing what they did to support the #16daysofactivismagainstgenderbasedviolence in 2021. 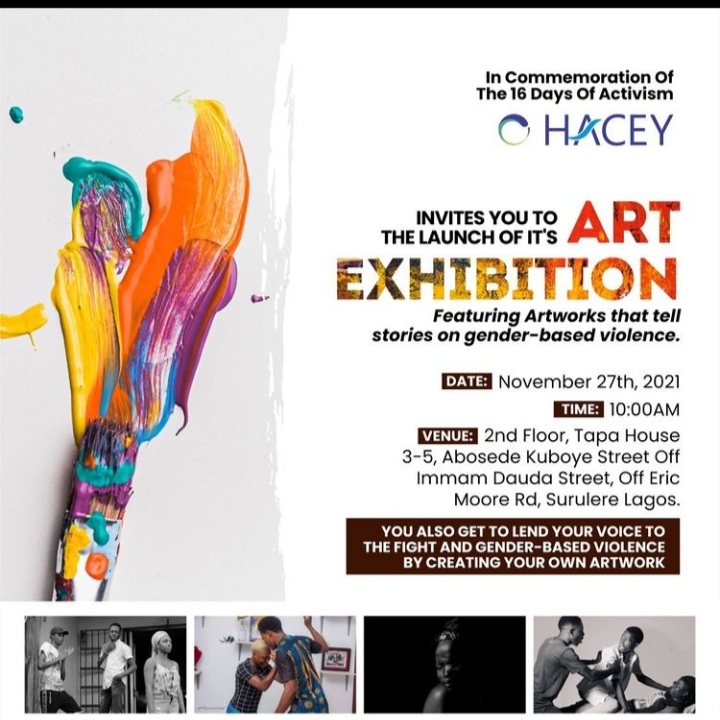 Hacey Health Initiative lent their voice to the campaign through enlightenment programmes, online campaigns and art.

Hacey Health’s ArtagainstGBV’s initiative was a creative action that used art to depict GBV. Hacey’s one-day ArtagainstGBV workshop granted youths the opportunity to use art to depict gender-based actions, and allowed them to speak up. 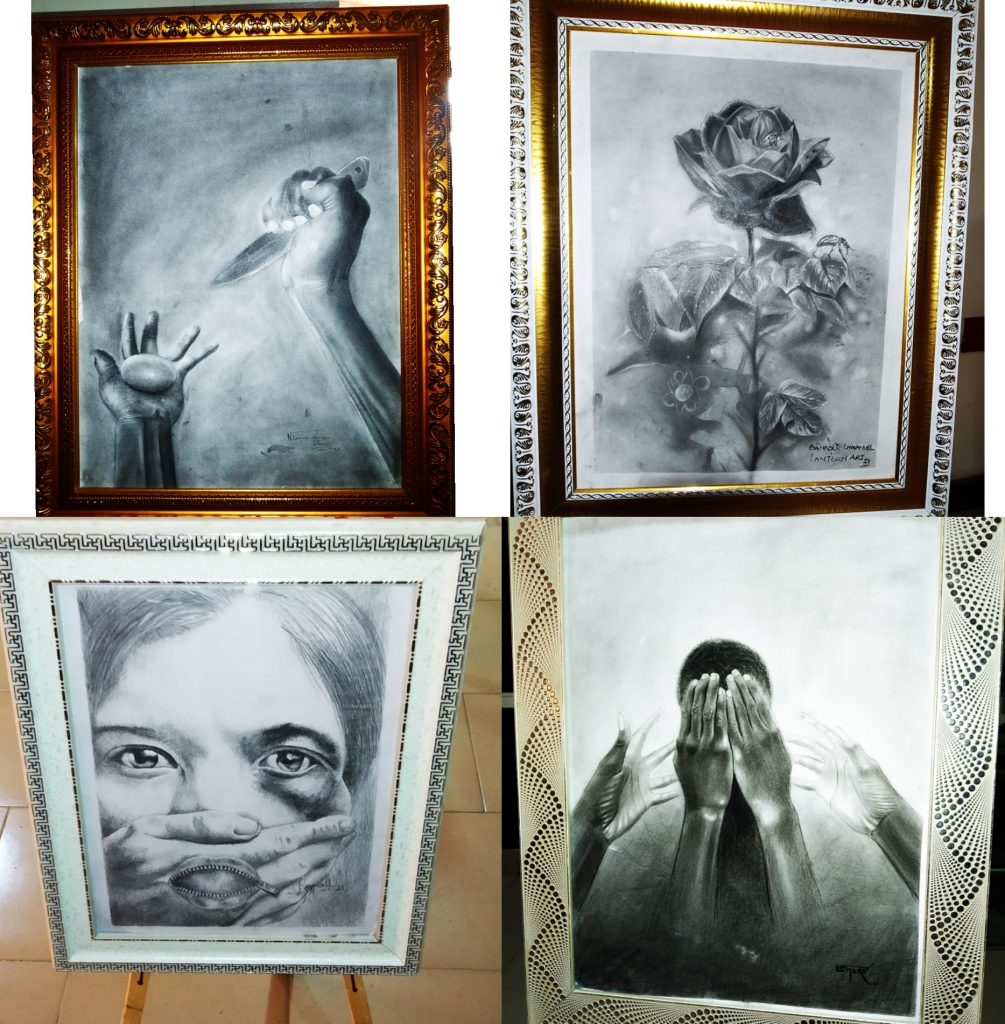 Some art pieces in the gallery

Then, there was Hacey’s Art exhibition which ran from November 27th to December 10th, 2021. I visited Hacey’s Art against GBV exhibition on the 7th of December. During my visit, I learned that artists had been invited to create the art displayed in the gallery. Every art piece I saw evoked a powerful message, telling stories of gender-based actions. My favorite piece was a pencil sketch depicting a young girl behind shattered glass. As she tried to scream for help, tears of blood threatened to roll down her cheek. Her voice was muffled, preventing her from speaking. The picture held a lot of meaning and is a perfect image of the world we live in, where survivors are bullied into submission and victims are not given a chance to share their pain. The art envisions the pain of silence. It was heavy and true, and these reasons as well as the attention to detail made me like it greatly. 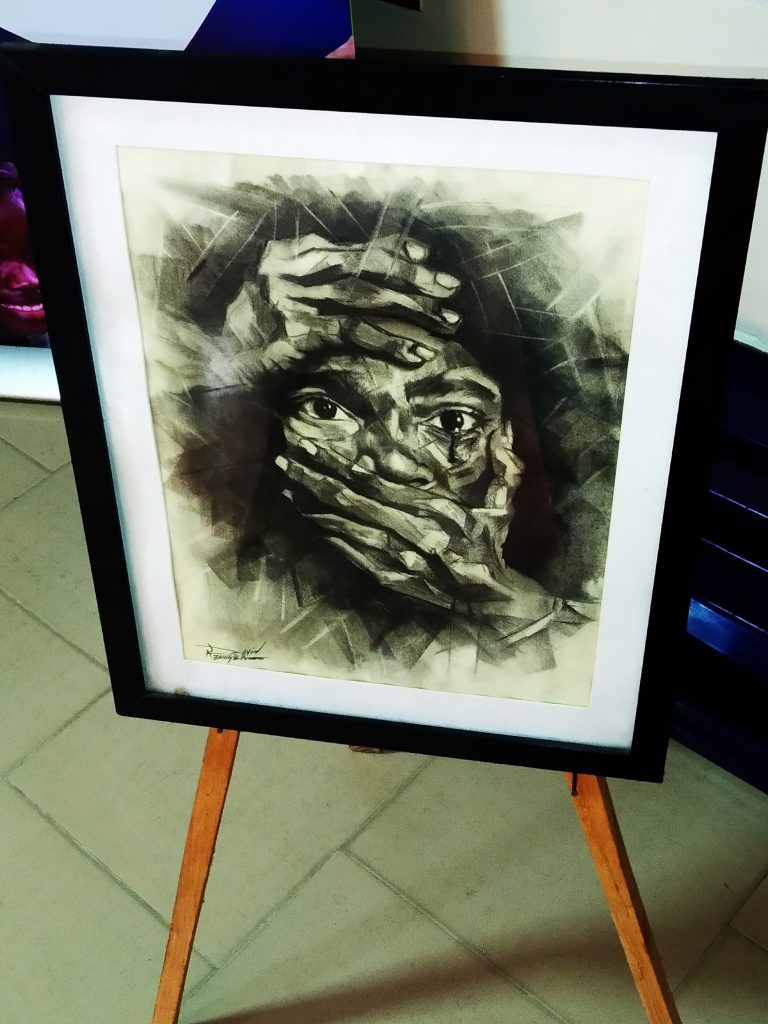 My visit concluded with an opportunity to create my own painting. I tried my best to put paint to paper and paint a female genital mutilation practice that has always bore down on me, breast ironing. 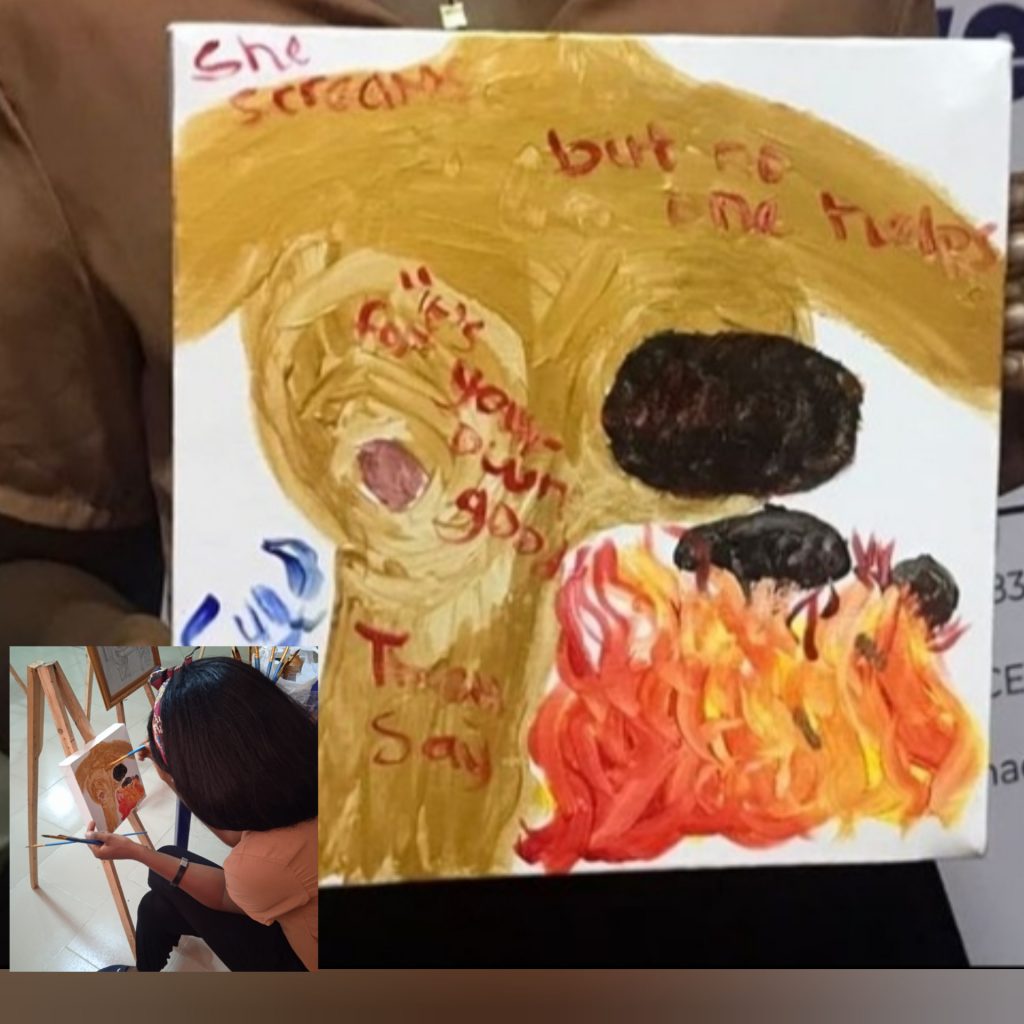 Hacey Health Initiative’s activities against GBV was just one of numerous that Nigerian nonprofits got involved in. Several other nonprofits also joined in the activism in different ways. 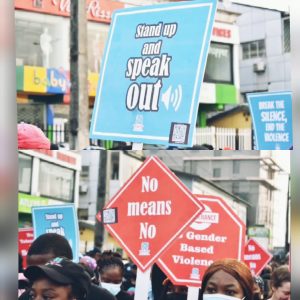 WARIF is an NGO focused on sexual violence survivors, providing them legal, physical and mental support and also being a safe haven. Year round, WARIF continues to activate actions against GBV so it was no surprise that they fully engaged in the 16daysofactivism. While WARIF held several enlightenment programmes during the campaign, their most prominent activity was the ‘No Tolerance March’. On the 4th of December, across five continents. In the cities of Lagos, London, New York, Sydney, and Bangkok, people went on long marches in support of the activism, clamoring for better policies and initiatives to protect women and girls. 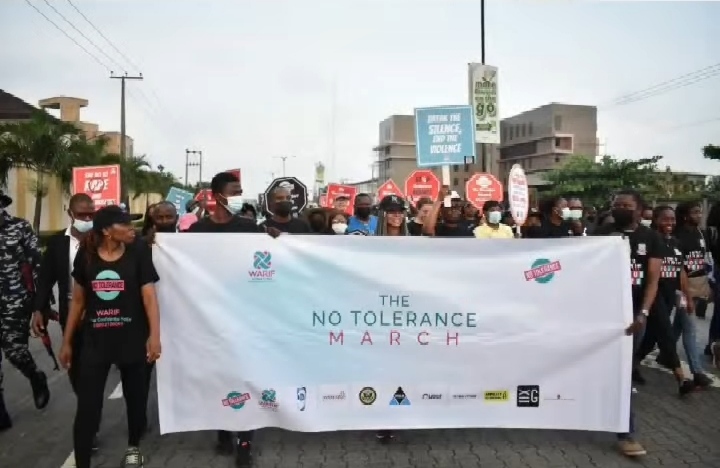 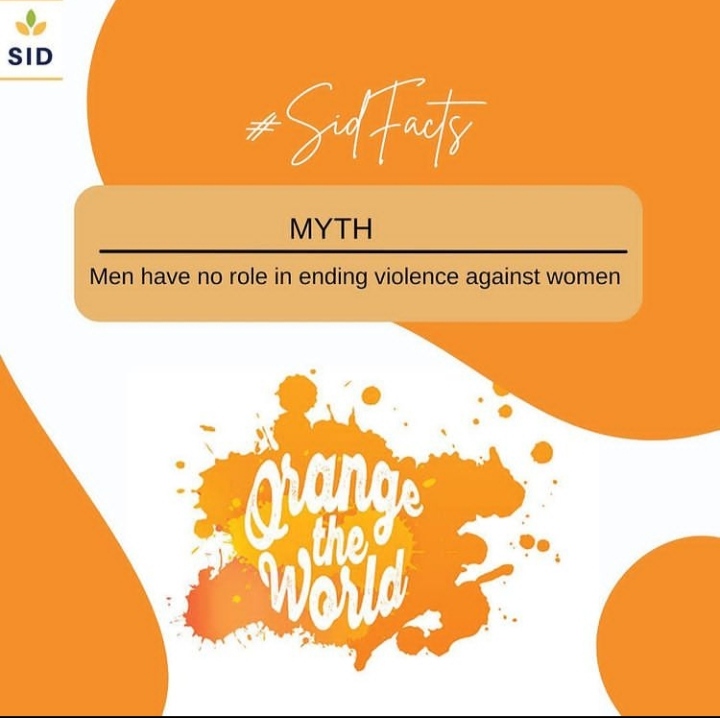 SID Initiative is a nonprofit that focuses on advancing sexual reproductive health of young people in rural and urban communities in Nigeria. SID Initiative participated in the #16daysofactivismagainstgenderbasedviolence through a social media campaign. The unique campaign consisted of exposing myths and facts surrounding gender-based violence. Some of the myths explored in the campaign were:

These myths are part of the problems forestalling the fight against GBV today. Using their online campaign, SID Initiative was able to propagate information and debunk these myths. 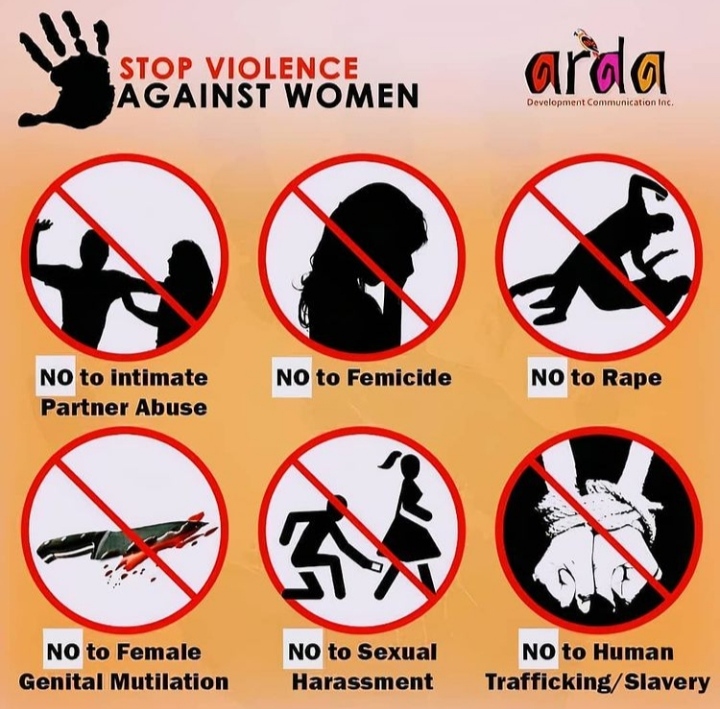 ARDA DCI is a communications based NGO that believes in communication for development, and aims to promote change through the media. ARDA DCI was not left behind during the campaign. Throwing their hat in the ring, they ran an educative online series educating about several aspects of gender-based violence, and campaigned against GBV. Some of the topics included in the campaign were:

ARDA was able to delve into these topics during the series and spread relevant knowledge.

Before the campaign, during the campaign and after, these organizations and several more continue to lend their voices to the cause. GBV is a menace that will need all of our help. Getting involved goes beyond the 16daysofactivism campaign. Sure, you might think to yourself that you do not have the resources nor the platform to do anything these organizations are doing but it does not have to be a barrier. Evil only triumphs when people remain silent. That way, you become part of the problem. You need to raise your voice when you see GBV happening, speak out! Defend that woman, that child! Don’t turn up your volume when you hear those screams! Do not shame the victim, help out and be empathetic. Do not be a part of this problem

We need policies and laws that protect women and girls, we need to pull down several age-long traditions that are dangers to the girl child, we need to educate people, as education is a key tool in this fight, and we need to protect survivors.

16 days of Activism Against GBV is over but that does not mean we should turn down the volume.  I have no intention of muffling my voice, you shouldn’t too.